PHOTOBOOK SAMPLES
INDIANS
Edward S. Curtis Library
Northwestern University
Thank you for the message.
ORIGINAL MAP
Nicholas King, cartographer
Library of Congress
LINKS
Sergeant Floyd’s gallant struggle to survive
... Floyd lay motionless next to Clark, who was seated on a cask next to him.
Floyd slightly opened his eyes, and with a great deal of effort, cleared his throat, before whispering in a barely audible tone: “Captain.”
Clark dropped to one knee and lowered his head, until he could feel the dying man’s breath on his ear.
“Yes, Sergeant,” Clark whispered back.
Floyd laid in silence, re-gathering strength for his next words. Images of his mother, father, brother and two sisters flashed through his mind, and brought him solace from the excruciating pain he had been enduring for weeks. In an instant, he relived countless fond memories, and his pain suddenly dissipated.
With newfound composure, Sergeant Floyd summoned the remnants of his power to convey a final message: “I — I’m going away — I want you to write me a letter.” ... 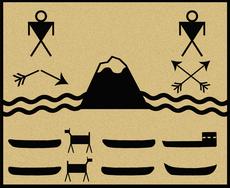 ABOUT
Crisis in the mountains
… Emerging from the trees well ahead of the party, the trio entered a clearing bound by walls of fog on three sides that stood between a ceiling of frigid clouds and floor of deep snow. Turning to examine the surreal surroundings, all three silently strained to find any sign of the trail — well aware of the possible consequences of failure to follow the correct route. As they carefully looked for any indications of the way forward, a cold gust of wind burst through the trees, blowing snow off the icy branches.
All they viewed was more of the same white curtain. The chill of soaked clothing and sopped moccasins suddenly acquired new meaning.
Disappearing into the mist in a state of unease, Clark rushed into the whitened blankness seeing nothing but more fog. Unease transformed into alarm, as the void yielded no clues. He nervously raced forward, and the foreground finally changed hue to a darkened white, imploring further investigation. Gray outlines slowly became visible, and soon identified themselves as the forested companion from which he last left the known trail. Plowing through the fluffy powder adjacent to the trees, Clark spotted a slight dip in the snow …

Capture of Sacajawea
... Unknown to both Sacajawea and Jumping Fish, the Hidatsa war party had swept down from a position on the adjoining hills overlooking the three forks. During the short battle that proceeded, they easily killed about a dozen men and boys who hadn’t already fled the skirmish. The dead were promptly scalped, and each of their bloody remains was tied to separate wooden poles. Shoshone possessions not claimed as war prizes were thrown into one of several fires ignited by the raiders. After taking all items of value, the Hidatsa war party began their exodus by heading east with their captives when a distraught woman emerged from hiding, running to confront the victors.
Smoke and flames in the distance provided the foreboding backdrop for the woman’s hysterical appeals.
In Shoshone, the woman screamed: “My child is with you! My child is with you!”
She soon learned that her child was not with them.
The infant was very alone in a cradleboard propped against a tree, incessantly crying for his mother, under a cold, gray, indifferent sky. The woman desperately and repeatedly pleaded with the chief to be allowed to return to her village. Her frantic cries fell on deaf ears, and she too was forced to march with the other prisoners. The war party and traumatized captives traveled the remainder of the day and through the night. In the morning, they finally stopped to camp, where the exhausted captives were commanded to sing Shoshone songs, while dancing with the scalps of their dead. ...

A historical novel based on the epic American adventure

Adventure on the plains
… Captain Clark was about to eat breakfast when he noticed a shadowy shape moving through the morning mist, just north of camp. The shape slowly changed into a more lucid figure that appeared to be someone on foot.
With a plate in one hand and fork in the other, Clark continued to observe the figure as it closed in, growing larger. He scooped up his food, took a bite and started to chew; planning the day in his mind and calmly wondering who was walking toward camp. Soon, he was able to identify the figure and suddenly spat out his food at the startling sight.
Big Horse — the Indian we had best come to know — was going to attend the important second council nude.
Captain Clark stared and shook his head in disbelief, as the Chief walked directly to him. Not knowing exactly how to react, Clark offered him breakfast and silently questioned the obvious.
But the answer would have to wait.
“Captain Lewis, Captain Clark, come quickly!” Private McNeal breathlessly called out while running toward us in a panic.
“What is it, Private?” I asked, turning to him. … 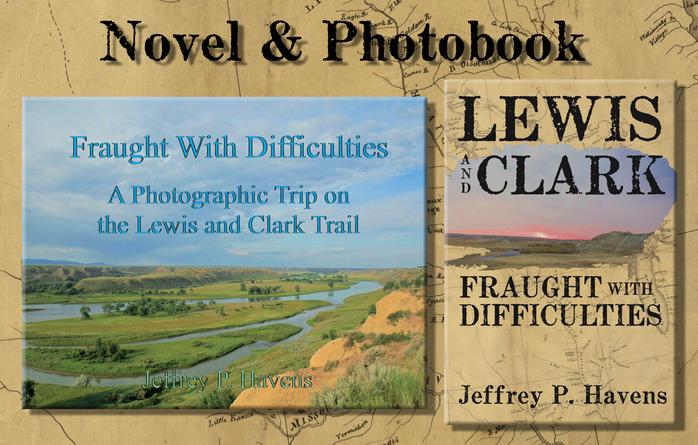 Researching and writing this novel and its accompanying photobook was an immense project. It began in June 2009 and completed in December 2019, after more than 10 years of demanding efforts.
During the early part of this process, I endured a financially and spiritually devastating time of unemployment and illegal home foreclosure in the fallout of the Great Recession. This led me west in search of work. Fortunately, this period also afforded me the opportunity to re-discover Lewis and Clark, after having interest in the topic for many years. As a consequence of the recession, I was uprooted from my origins in the Midwest, and lived in several tremendous areas along the trail that enabled me to relive the Lewis and Clark adventure — namely South Sioux City, Nebraska; Glendive, Montana; and Helena, Montana. Great proximity afforded many opportunities to visit and revisit sites over several years in an effort to recreate what they likely experienced.

A historical novel about epic adventure in the American West

To Buy FWD email interest to:

In 1803, United States Army officers Meriwether Lewis and William Clark accepted a dangerous mission to explore the western portion of what today is the United States. The mission was offered by President Thomas Jefferson to Lewis who chose Clark to help lead the expedition. The mission had many purposes. Among the purposes was to document whether a water route existed to the Pacific Ocean, which was known as the “Northwest Passage.”
​These books are a narrative of that great mission: A mission FRAUGHT WITH DIFFICULTIES.
​​MAPS
Lewis a​nd Clark Trail
National Park Service
York spins a tall tale
... Sensing the opportunity to amuse himself, exploit the naiveté of the Indians and spin his own tale, York expanded on his owner’s remarks. A gathering crowd of children maintained a safe distance.
“A long time ago, I used to live in the woods,” York began his tale.
The Indians marveled at his rich baritone voice and immense height and weight. He crouched to get eye level with the children.
“I used to eat all sorts of things,” he said. “But my’s favorite was people. Yes, sir! I loved eatin’ people, especially young’uns likes you all” ...

​TRAIL
Lewis and Clark
National Park Service
Fate at the falls
... just above the falls, a large bull buffalo had trodden into the water.
A short distance away, the entire herd was scattered along the riverbank, watching the bull’s lead.
He slowly moved into the swift current, and it rippled and flowed around his spindly legs. The bull took a few more steps. His hooves were suddenly swept off the riverbed, and soon the bull was immersed up to his neck in the water. Now helplessly drifting into the main channel of the river, the huge beast frantically kicked its legs and made some progress in reaching the opposite shore. But the current was much greater than the bull’s ability to fight the increasing force of the river, as it drew nearer a roaring precipice.
Carrying the doomed beast to the edge, it quickly disappeared under the horizon. Turning and tumbling in its long descent, the bull met fate when his head smashed onto a craggy rock at the bottom of the falls — shattering into many large chunks and small pieces.
Floating downstream, the bull’s headless carcass bobbed in the rough waters, leaving behind a crimson stream. It finally came to rest on the opposite shore, alongside the remains of many others that met a similar destiny. A few minutes later, a dozen more freshly mangled corpses from the herd joined the bull, where five white bears feasted on the abundance. ...
NOVEL
Started:    August 10, 2010
Finished:  March 27, 2016
Published: Volume One, Fall 2015
Volume Two, Fall 2016
Consolidated novel, June 2017
Word count: 240,570; April 2018
Great effort was made for the story narration to adhere to the expedition journals, and is supplemented with many historical facts
The novel includes a comprehensive timeline, source list, bibliography, index, and alphabetical list of characters
PHOTOBOOK
Started:     June 5, 2009
Finished:   May 17, 2020
Published: January 2021
​    A companion book of photos is also for sale. All photos were taken by the author all along the Lewis and Clark trail.
View on Mobile